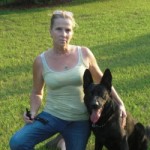 A few years ago, about the time we were ready to have a new puppy again, we were lucky enough to run into a breeder of AKC Registered German Shepherds who was giving away her “leftovers” to any deputies at our sheriff’s department. These were pups that she had not been able to sell from her litters and were now 6 months old and out of that cute little puppy stage. My son-in-law took one and brought it out to show us. When I saw the look on my husband’s face, I knew it was time and told my son-in-law if he was lucky enough to be given another free one, we would take it.

A week later, on my husband’s birthday, they returned with a 6-month-old black GS. Talk about the awkward stage. His ears were bigger than his head and he couldn’t take ten steps without tripping over his own feet. No wonder no one bought him. But we loved him and jokingly called him Batman, but his name was Zeus.

I had worked with professional trainers in the past and knew enough that all our dogs had basic obedience. Come, heel, sit, stay, down. Zeus caught on fast. Our problems began just after he turned a year old. We have eight kids and so we also had a lot of kid visitors. No problem. Zeus loved kids…..the parents, not so much. He was in full on attack mode to save the kids. Wouldn’t let any adult cross our threshold. Didn’t want people that weren’t in our family touching him. I’d never, NOT had a friendly dog. I didn’t know what to do. I’m reprimanding, yelling at him, and finally just putting him away when there were going to be adults visiting. I’m also having nightmares over lawsuits and wondering if we were going to have to put him down.

It wasn’t a matter of IF he was going to bite someone, but WHEN. It had been years since I’d been to a professional, but I knew I had to find one. Not one of these silly dog classes I had seen that had popped up everywhere in recent years, but a professional. I found Dennis Dalia. I talked to Dennis on the phone for awhile. I explained my problems and got information on his background. I was impressed. Here was a guy who had spent his life working with and training dogs. He asked me lots of questions and suggested that I bring Zeus in for a demo. I was definitely intrigued.

I mean, how can this guy do a demo with my dog? I just told him that he will probably want to go for his throat and he certainly wasn’t going to let him touch him. He told me to let him worry about that. What I saw that day was magic. I know someone else is already called the Dog Whisperer, but that’s what I call Dennis.

I have never seen such an instant bonding. And I see it over and over, every time I watch him work with a dog. Within minutes they’re looking at him and focus on him. It’s like they’re just waiting to hear what he will say. I wanted that. I wanted my dog to listen to me like that. I signed up that day. I recommend Dennis for beginners to advanced. Whether you’re having puppy problems, aggression problems, or can’t get the title that you’ve been training for forever, Dennis knows dogs and will solve your problem.

I’ve seen him fix dogs that other trainers have said were not fixable. I see people being walked by their dogs down the street all the time, and I want to jump out of my car and give them his card. Your dog wants a leader. If you don’t lead, then they will attempt to step up and take that position. Even if you do lead, if you have a headstrong or dominant dog, they will want to test the waters and see where things stand. Dennis shows you how to lead. What Dennis says makes sense.

He explains how dogs think and how they work in a pack. How their mom leads them. And he shows you how to work with them using that knowledge. You find out that some of the cute things that you thought were them being affectionate towards you were actually them showing their dominance over you. You find out sooo- many things. And with that knowledge, your relationship with your dog becomes amazing. Thank you for so much Sandy.